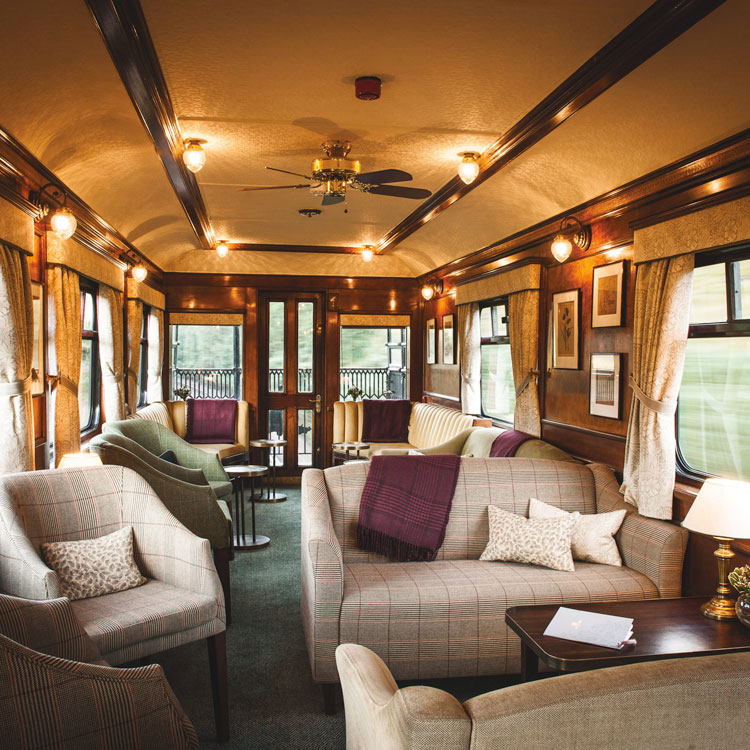 From the liveried steward who greets you as you board the restored vintage Royal Scotsman train in Edinburgh, to the magnificent scenery which rolls past your mahogany-panelled parlour car on your way to the Kyle of Lochalsh, there is no finer way to view the Scottish Highlands than on this historic and unmissable five-day, four-night journey. The Royal Scotsman is considered to be the world’s most luxurious trains as you explore the magnificent scenery of Scotland, visiting places unseen by most visitors.
Travelling 720 miles through misty mountains and glens, beside glittering lochs, past unspoilt beaches and along dramatic unspoilt coastlines on little-used railway lines, we shall see a different side to Scotland’s great beauties. 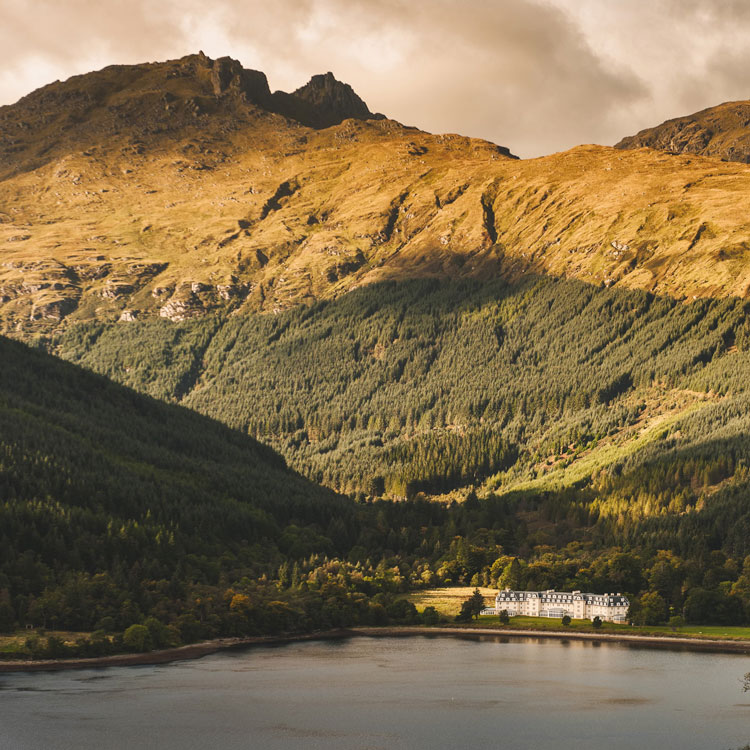 And we shall stop along the way to visit magnificent private homes and castles—including HM Queen Elizabeth the Queen Mother’s former home, Glamis Castle—on a vintage train which is renowned as one of the world’s most exclusive. Only 36 guests will be aboard, travelling in 10 intricately designed carriages, including the sublime Bamford Spa, forming, literally a palace on wheels.
Our five-star vantage point is indeed like an elegant palace, with seamless service and cabins fitted out in rich wood with Scottish-motif marquetry. The kitchen produces exquisite meals reflecting the local delicacies, from full Scottish breakfasts to dinners featuring loch prawns, smoked salmon, rack of lamb, Angus beef and venison. The wine list is surpassed only by that of the single malt whiskies! 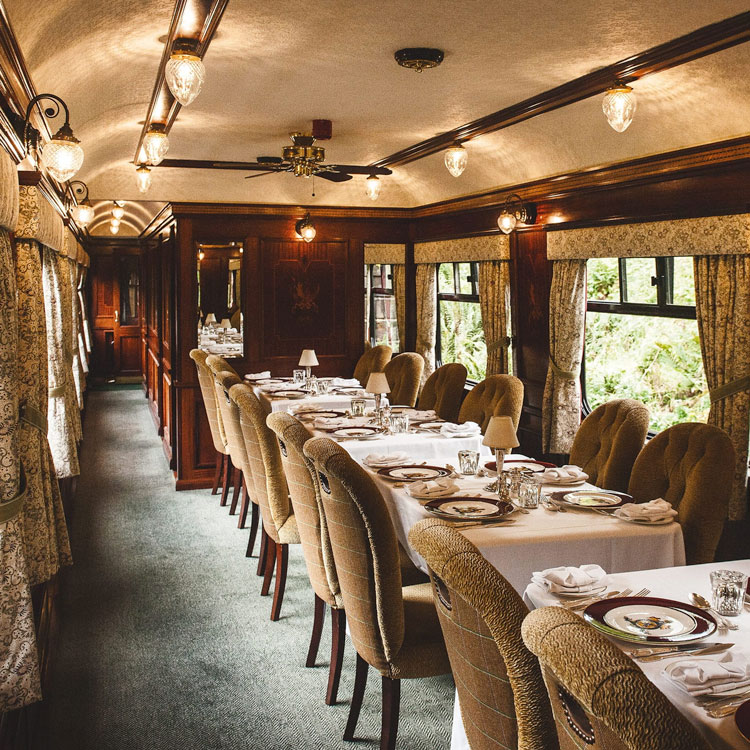 Along the way, not only shall we disembark to visit grand country estates and ancient castles, we shall have chance to take part in activities such as flyfishing and clay pigeon shooting, or simply stroll to enjoy the fresh Scottish air.
Our journey begins at Edinburgh’s Waverley Station after a night spent at Edinburgh’s famous five-star Waldorf Astoria The Caledonian Hotel on Princes Street, in a suitably luxurious room with views of Edinburgh Castle. The Royal Scotsman will glide into the station, resplendent in her purple and gold livery, and her uniformed staff will greet us. As we settle comfortably into our vintage carriages our journey begins, travelling north to cross the first of several famous stretches of water, the Firth of Forth, via the magnificent, 1.5-mile long Forth Railway Bridge, built by Benjamin Baker in the 1880s and considered by many to be the eighth wonder of the world. 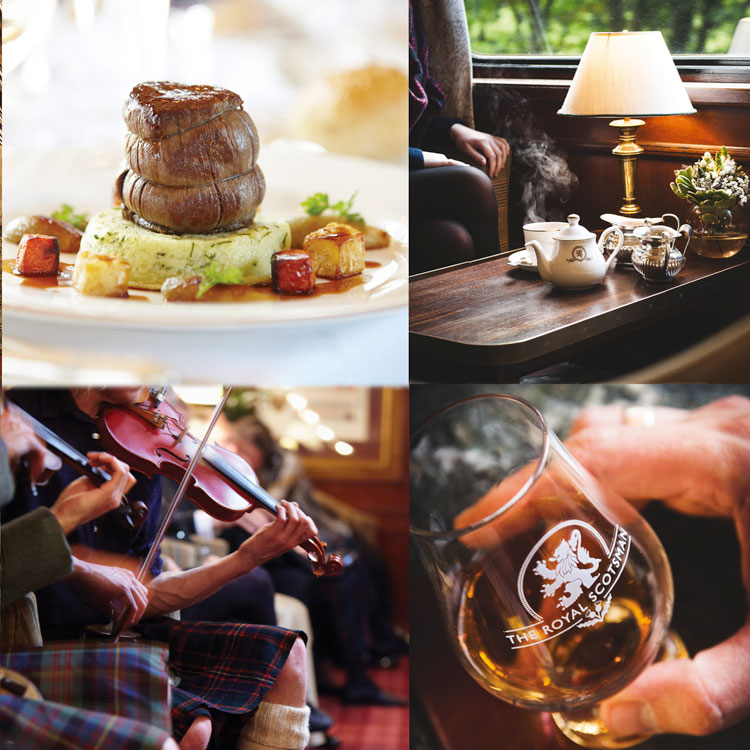 Afternoon tea will be served as we travel through Fife and across the Tay Bridge, passing Arbroath, Montrose and Aberdeen, before arriving in Keith. That evening we shall enjoy the first of our delicious dinners, followed by entertainment in the Observation Car, an Edwardian masterpiece, as we soak up the unique atmosphere of the Royal Scotsman train and perhaps enjoy a nightcap. So attentive is the service that all you have to do is arrive, unpack and relax. Everything else is taken care of. You can even leave your wallet or purse tucked safely away, as all meals, drinks, entertainment and excursions are included. Next morning we shall leave Keith and journey west along the Moray Firth towards Inverness, capital of the Highlands, which we pass through before heading on to Muir of Ord.
Lunch is served as our magnificent train heads towards the Kyle of Lochalsh—arguably the most scenic railway route in Britain, taking in spectacular Highland scenery—and finishing with magnificent views of Skye. The line passes Loch Luichart and the Torridon mountains, which geologists believe were formed before life began. The train then climbs to Luib summit and Achnashellach forest, descends to Strathcarron and runs along the edge of stunning Loch Carron. 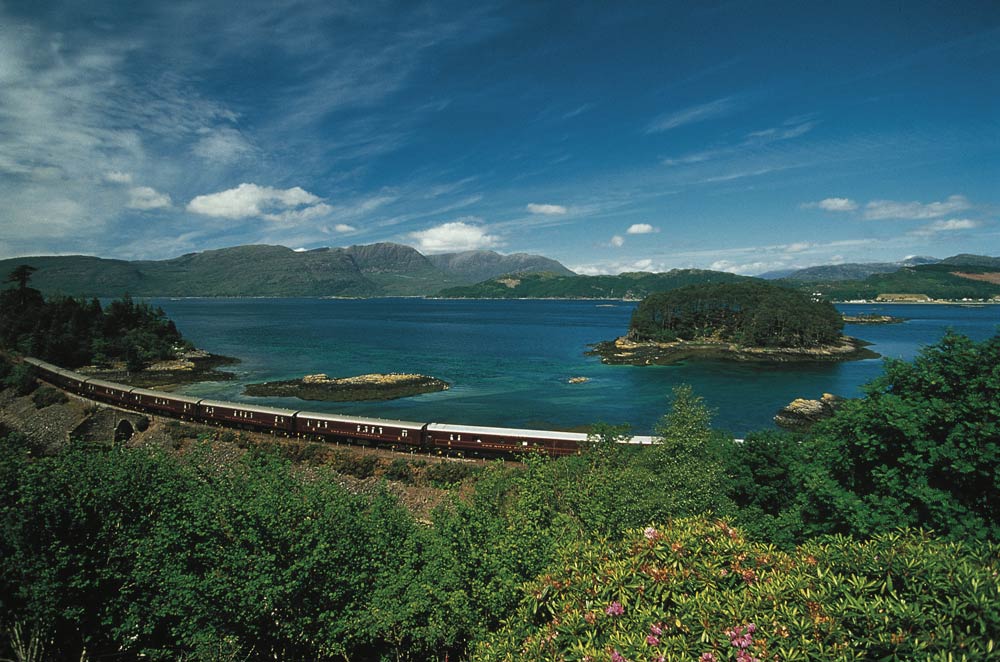 Along the way we shall alight at Cawdor Castle, a legendary castle on the banks of the River Findhorn. Still occupied by the Thanes of Cawdor, it is forever linked to William Shakespeare’s ‘Macbeth’. Wrote Shakespeare, ‘This Castle hath a pleasant seat; the air Nimbly and sweetly recommends itself Unto our gentle senses’.
The link between Macbeth, Cawdor and Shakespeare is a complicated web of half-truths. The fact is that Cawdor Castle was not built until the late 14th century, making it impossible for King Duncan to have lost any blood or indeed Lady Macbeth much sleep in this particular house. The legend persisted, however, causing the 5th Earl Cawdor to exclaim, ‘I wish the Bard had never written his damned play!’ We shall explore the castle and grounds before resuming our journey, spending the night on board in the Kyle of Lochalsh, gateway to the Isle of Skye. 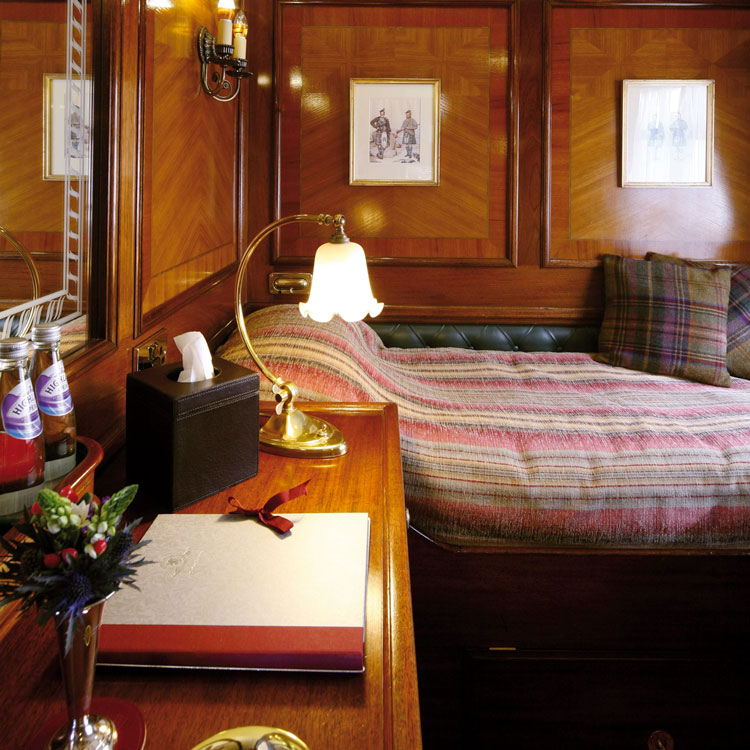 As evening falls, the train’s grand formal dinner is a highlight of any journey. Guests are invited to dress the part and are welcomed to the bar and dining cars where they can enjoy an aperitif. Once seated at softly lit tables, your menu might begin with a warm pigeon salad accompanied by blackcurrant dressing, or seared Scottish scallops with sauce vierge, continuing with spiced roast halibut or roast loin of lamb with wild mushrooms and truffle risotto, and conclude with iced hazelnut parfait with raspberry coulis or vanilla apple mousse, all accompanied by fine wines and served in one of the two original Dining Cars. This is superb, fresh-from-the-fields produce prepared in as innovative a style as one expects of a five-star restaurant —and one which offers mesmerising views over Loch Alsh to the Isle of Skye.
Next morning we can walk over the bridge which links the Scottish mainland with the Isle of Skye. Or take a short drive to marvel at Eilean Donan Castle, one of the most iconic images of Scotland across the world. Situated on an island at the point where three great sea lochs meet, and surrounded by majestic scenery, the castle is one of the most visited and important attractions in the Highlands. Then it’s back to the Royal Scotsman for a hearty Scottish breakfast as we resume our journey bound for Dingwall. 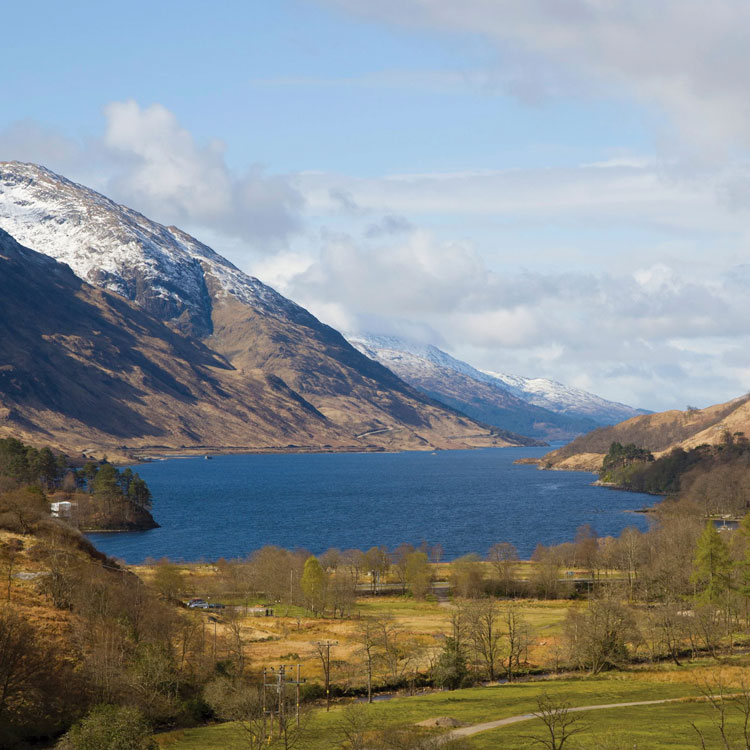 Keep an eye out for Ben Wyvis just after Dingwall, a huge isolated mountain to the north. Then, at the other end of Loch Carron we shall take in the views of Plockton across the bay, seeing white-washed cottages with fishing boats and yachts at anchor. The train skirts the Beauly Firth and crosses the top of the Caledonian Canal, north of Loch Ness, passing through Inverness and on to Carrbridge where we can disembark to visit the romantic Ballindalloch Castle on Speyside, one of the finest surviving examples of a classic Scottish baronial castle, and one with wonderful gardens. Here, you may take a tour of the castle, play nine holes of golf on the castle’s own course, or take an exclusive look at what is Scotland’s only single estate distillery. 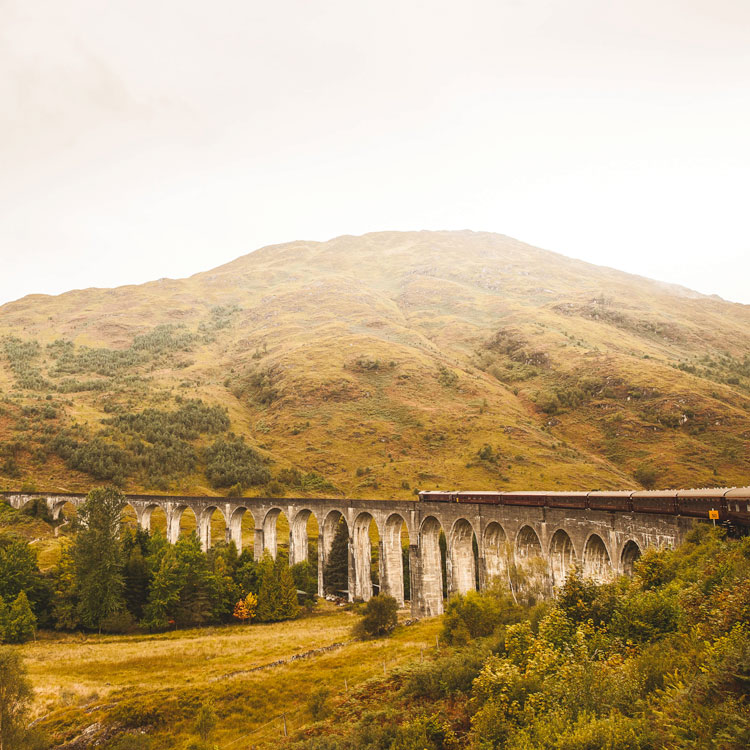 Later we shall board the Royal Scotsman for a night at Boat of Garten, on the private Strathspey Railway line. Another delicious dinner will be served, followed by an evening of entertainment from a Highlander regaling us with tales of local heroes and villains and performing expert weaponry displays—Highland dirks and targes, the claymore and the mattucashlass included.
Next morning we shall travel by coach to Rothiemurchus Estate on the banks of the River Spey, in the heart of the Cairngorms. This is where we may enjoy some flyfishing and clay pigeon shooting, or a tour of the estate with its wonderful wildlife. We shall rejoin the train at Kingussie, where lunch will be served as we journey south through Blair Atholl and Pitlochry to Dunkeld. And now it is time to enjoy another of our journey’s highlights—a visit to Glamis Castle, perhaps Scotland’s most beautiful castle, childhood home of HM Queen Elizabeth, the Queen Mother.
Glamis Castle is one of the most impressive, romantic castles in Scotland, home to the Earls of Strathmore and Kinghorne for hundreds of years. With a splendid interior, filled with history and antiques, set in beautiful gardens and grounds near Forfar in Angus. Glamis is perhaps one of the most haunted of Scotland’s castles and the Queen Mother, who spent much of her childhood at Glamis and gave birth here to HRH Princess Margaret, was believed to have seen a fair few ghosts here herself. 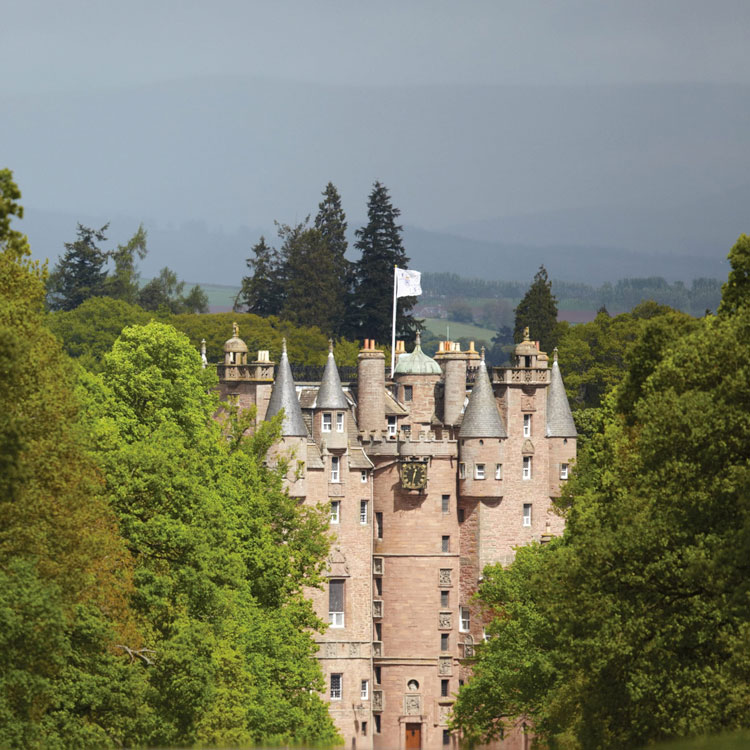 We shall be following in the footsteps not only of the Queen Mother but of Mary, Queen of Scots, King James V, Bonnie Dundee, the Old Jacobite Pretender to the throne, James VIII and more. History surrounds us, and the escorted visit will take us around the luxurious apartments, the crypt, the private chapel with painted ceiling, and the sitting room used by the Queen Mother.
Our vintage train awaits us in Perth, where we shall dress for a formal dinner for our final evening, followed by an overnight stay on board in Dundee. Next morning, after another sumptuous Scottish breakfast we shall travel south back to Edinburgh, where at 09:45 our wonderful rail journey comes to a close. 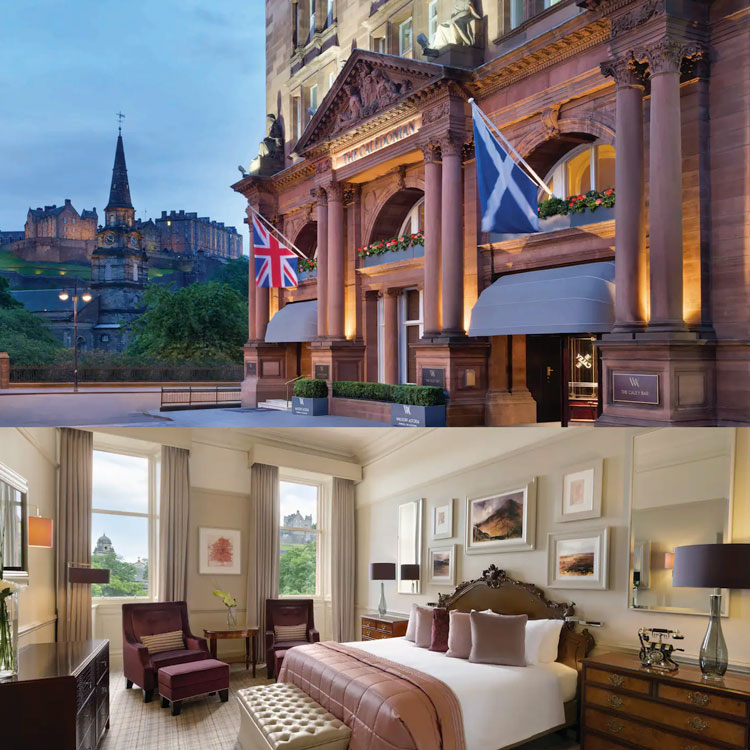 CountryClubuk Members receive an advantageous rate for all Royal Scotsman Classic Splendours journeys, including an extra night prior to the journey at the Waldorf Astoria The Caledonian Hotel in a room or suite with an Edinburgh Castle View. Members also enjoy preferential rates on all other Royal Scotsman journeys. All bookings are subject to availability at time of booking.
¶ To see full details of the Waldorf Astoria The Caledonian Hotel Edinburgh, where our Members can book at advantageous Club rates at any time, please click here.
PLEASE READ: CountryClubuk Club Rules and Terms and Conditions

We use cookies to ensure that we give you the best experience on our website. If you continue to use this site we will assume that you are happy with it.OkPrivacy policy