To stay in the heart of Edinburgh, one of Europe’s loveliest capitals, beside its showcase landmark, Edinburgh Castle, is magical. To see the golden sun set on the castle walls from the windows of your own private room or suite makes it even more amazing—what a view this is! And as a Member of CountryClubuk you can enjoy it all from one of Edinburgh’s most historic five-star hotels, the current holder of the World Travel Awards’ Scotland’s Leading Hotel—the perfectly located Waldorf Astoria Edinburgh-The Caledonian, at exclusive Club Members’ rates. 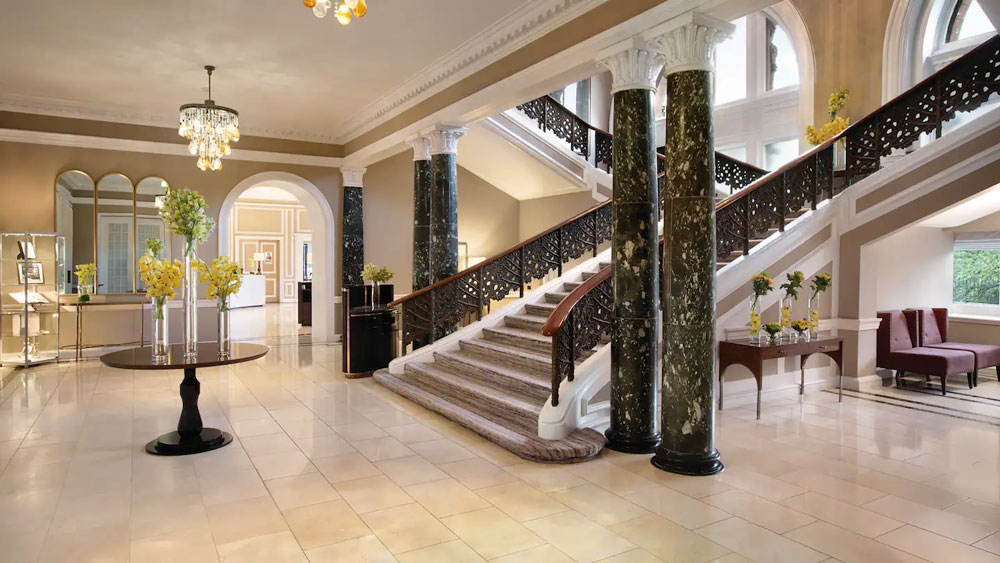 The large, rose-coloured Permian sandstone hotel is a haven of luxurious Scottish hospitality, not only a grand railway hotel with spectacular castle views from guest rooms, restaurants and bars which will literally make a simple holiday spectacular, but a 21st century hotel with all the  amenities you require within fine, vaulting Victorian interiors and 241 sumptuously decorated rooms. Edinburgh will literally be at your feet to enjoy. And as this fabulous hotel is in the Top Three Conde Nast Traveller current Readers’ Awards—and is one of our Members’ tried-and-tested favourites—you can be sure to have a wonderful stay. 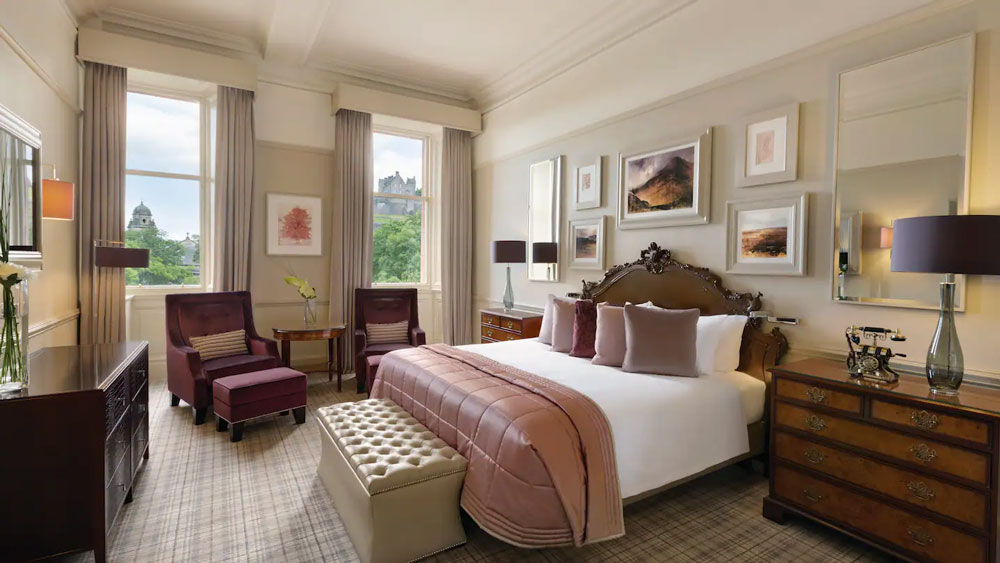 Robert Louis Stevenson once said, ‘Edinburgh is what Paris ought to be’ and when you look down on to its mediaeval lanes and elegant sweeping terraces, and then farther afield towards the 18th century ‘new town’ with its gorgeous Georgian squares and avenues, you can see he was not far wrong. Most of the city’s history is clustered in and around the mediaeval castle and the Royal Mile, and you will stay at its heart in this beloved hotel affectionately known to local folk as the ‘Caley’, a major part of the historic railway which once transported travellers from around the world to stay in the hotel which is also known as ‘The Old Lady of Princes Street’. 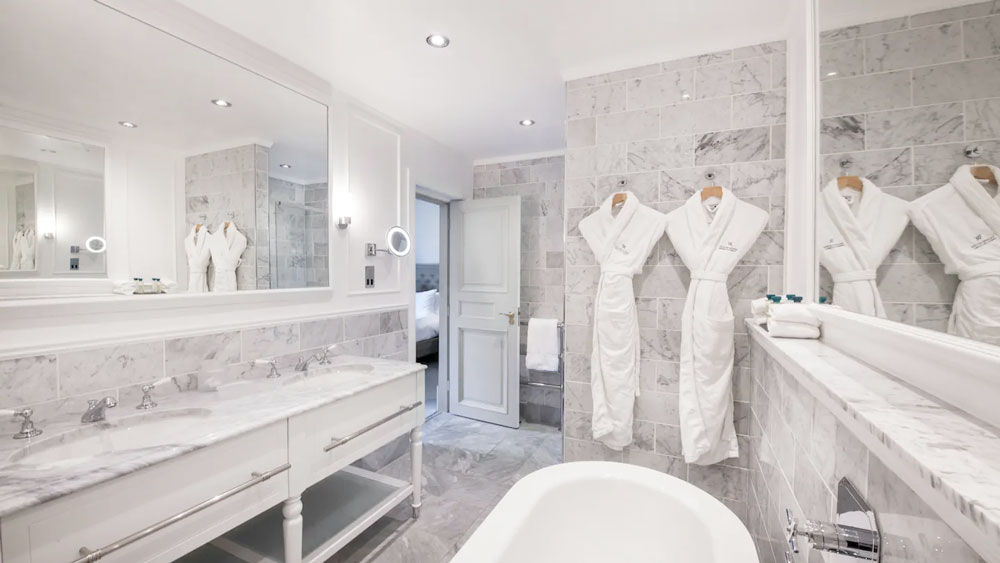 That pivotal location at the very heart of Edinburgh is naturally a great asset for hotel guests, as are the style, excellence and continuing world-class service. The hotel has not only remained a focal point of Edinburgh life for more than a century, but remains a symbol of the very best of Scottish hospitality. 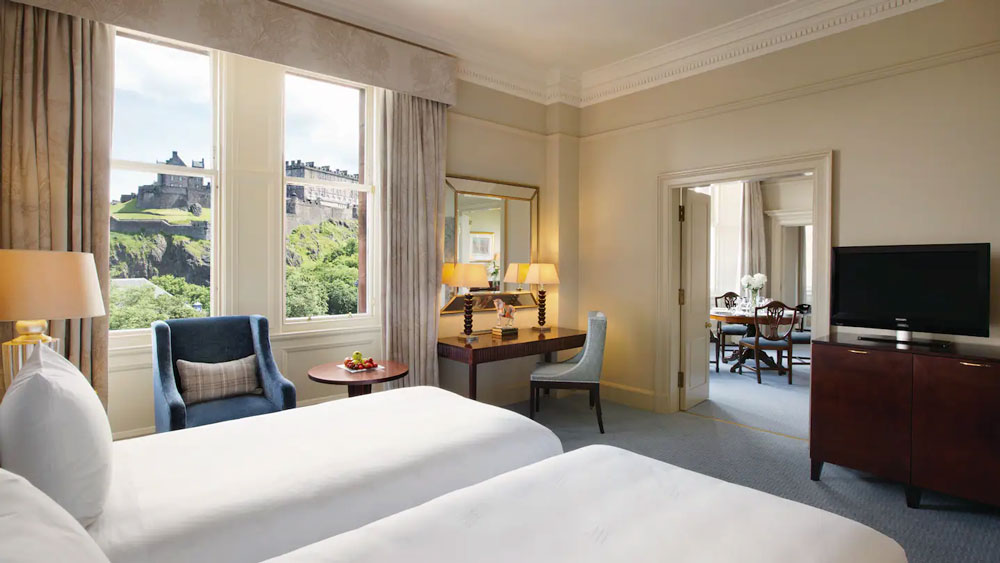 Created out of the 19th century railway boom, the five-star hotel’s reputation is as justified now as it was when it first opened its doors in 1903. Built as part of Edinburgh’s central railway station, the hotel dominates the skyline of the city’s west end. It is only a short walk from Princes Street and the Royal Mile, Edinburgh Castle and its UNESCO heritage site and Military Tattoo. The intriguing Old Town can be reached within a 20-minute walk. 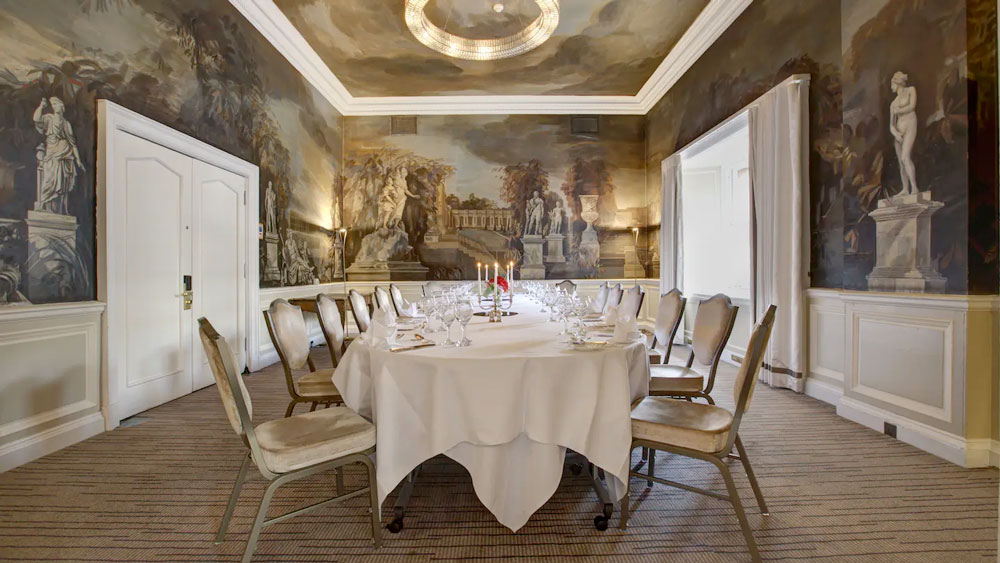 As to the elegant rooms and suites, each is larger than usual, in line with its Victorian roots, and beautifully furnished, light and airy—and look out for the categories which give you unobstructed views of Edinburgh Castle, named, helpfully, ‘with Castle View’. It is well worth securing these rooms and suites—or splash out on the named suites which evoke Scotland’s golden era, the Robert Louis Stevenson, the Sir Walter Scott, the Alexander Graham Bell, and the Caledonian.

Railway history is of course integral to this fine hotel—even the entry-level Queen Carriage room offers historic details from metalwork to polished burr veneers, reminiscent of the finishes in Victorian railway carriages. As to facilities, each room and suite offers all you expect from a five-star hotel, from wifi to flat-screen TV, luxurious bathroom with fluffy bathrobes and designer toiletries by Salvatore Ferragamo, plus a minibar, safe, refrigerator and iron, laptop safe and 24-hour room service. Some rooms are totally non-smoking, others are pet-friendly. 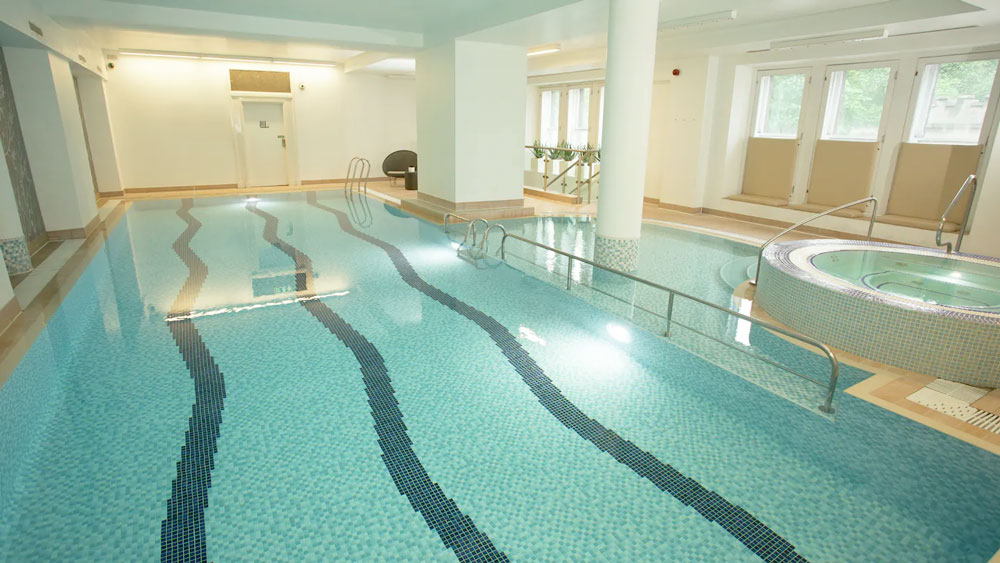 The food is excellent, from the hotel’s award-winning main restaurant by celebrity chef Mark Greenaway, which is a traditional gourmet delight with generous portions—despite its name, Grazing—to the famous Peacock Alley for delicious breakfasts and afternoon teas, and The Caley Bar for drinks, bar meals and tastings—the whisky bar offering has to be seen to be believed. For spa treatments, guests have access to the Guerlain Spa, which offers an array of treatments as well as a steam room, sauna, Jacuzzi, swimming pool and gym. Not only these, but the Guerlain Spa offers a swimming pool and a whirlpool with stunning views overlooking the castle!

As well as an unforgettable stay with stunning views of Edinburgh Castle, the hotel promises five-star service standards, a business centre and on-site parking, while guests can enjoy a wide selection of tailor-made experiences from Champagne picnics and golf excursions to private boat trips and helicopter tours.

As a CountryClubuk Member you enjoy exclusive advantageous rates at this fine, award-winning hotel. To check availability and book, please call Member Services on 020 7399 2960 or follow the link below.