Skip to content
Expect history and culture, and also luxury, relaxation and pleasure during a fascinating and unforgettable day. We shall travel through the English countryside in high summer aboard the vintage British Pullman train from London Victoria Station to Highclere Castle in Hampshire, seat of the Earls of Carnarvon, enjoying a Champagne reception and fine dining to rival the leading London restaurants along the way. 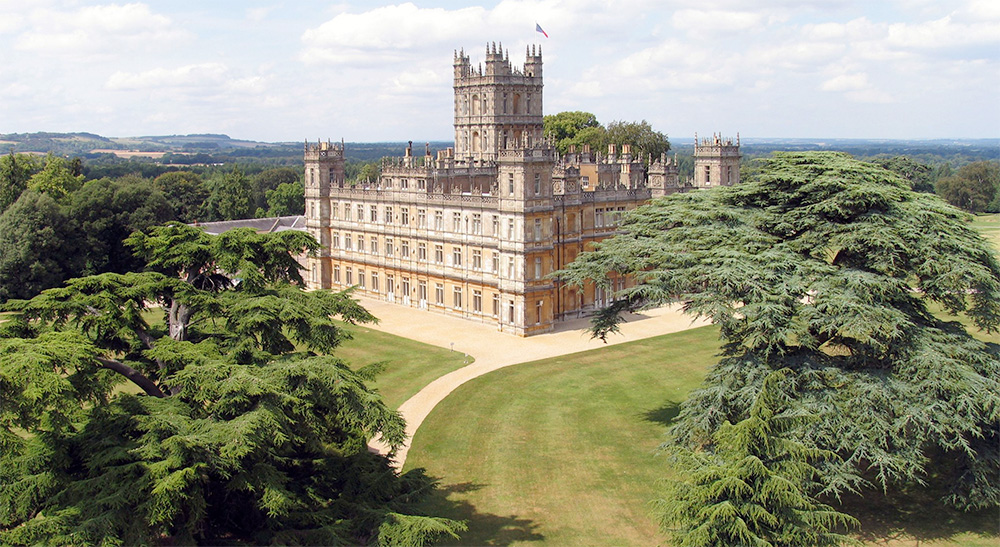 We shall enjoy a private view of the magnificent State Rooms of Highclere Castle, one of the great stately houses of England. And we shall visit the spectacular Egyptian Exhibition of priceless artefacts from the Tomb of Tutankhamun. The event has been arranged to mark the centenary of the discovery of the tomb of the ‘Boy Pharaoh’ by the 5th Earl of Carnarvon and Howard Carter. It is considered one of the world’s most important archaeological discoveries ever made, as well as one of its most exciting and controversial. 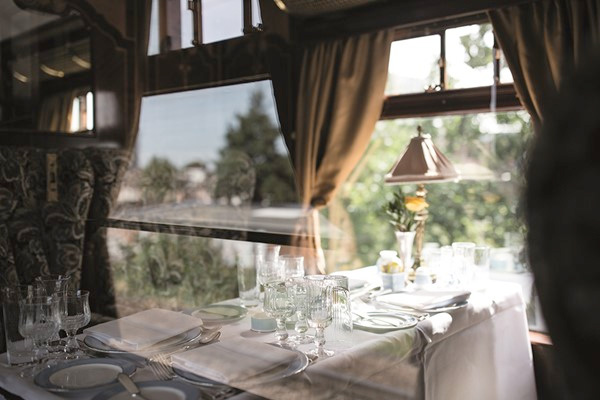 Originally conceived as ‘Palaces on Wheels’ by George Mortimer Pullman, each lavishly appointed carriage is an original 1920s and ’30s masterpiece from the golden age of rail travel. Lovingly restored with breathtaking attention to detail, each car is a symphony of intricate marquetry, inlaid mosaic floors, sparkling crystal and beautiful Art Deco design. We shall be travelling in style in beautifully restored original named 1920s carriages, all of them with their own tales of history and romance: ‘Audrey’, regularly used by the Royal Family, carried the Queen, the Queen Mother and the Duke of Edinburgh to review the Fleet in 1953; ‘Phoenix’ was the Queen Mother’s favourite; and ‘Perseus’ formed part of the funeral train for Sir Winston Churchill.

Their exquisite design and workmanship is legendary. Art Deco lamps cast a soft glow over polished brass and gleaming mahogany, while plump armchairs provide a supremely comfortable experience. The British Pullman is a hidden gem of rail travel, offering passengers the chance to step back in time and experience luxury train travel as it was—and should be. With its original, fully restored 1920s carriages and customary exceptional Belmond service delivered by liveried stewards, the train evokes the golden age of travel, when travellers were elegantly dressed and had the time to relax and enjoy their journey. 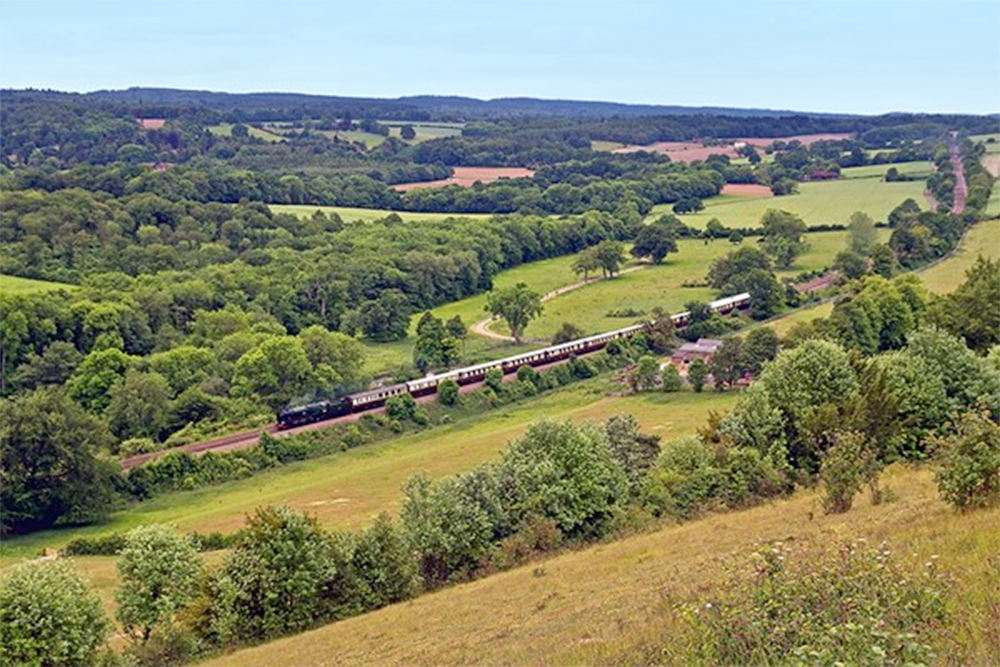 We too shall relax and enjoy our journey as we board the train in London Victoria Station on the morning of Wednesday, June 7. We shall settle into our plush seats and raise a sparkling Bellini cocktail to toast the day ahead. Each elegant table is set with crisp white linen and bespoke china and glassware for the exquisite three-course brunch to follow. As we savour each gastronomic dish we can take time to admire the beautiful marquetry and Art Deco features which surround us. We can sit back and relax as liveried stewards take care of our every need, while we enjoy delightful views of the rolling English countryside through the Pullman’s large picture windows.
And what awaits is breathtakingly fascinating. Highclere Castle, setting for the fictional TV series ‘Downton Abbey’, is, more importantly, the family seat of the Earls of Carnarvon, and a century ago, it was home to the 5th Earl, a nobleman who loved fast cars and racehorses, and after a motor accident forced him to spend the winters abroad, who developed a passion for archaeology and Egypt which led him, as patron of Howard Carter, to make the dramatic discovery of the tomb of the boy king. 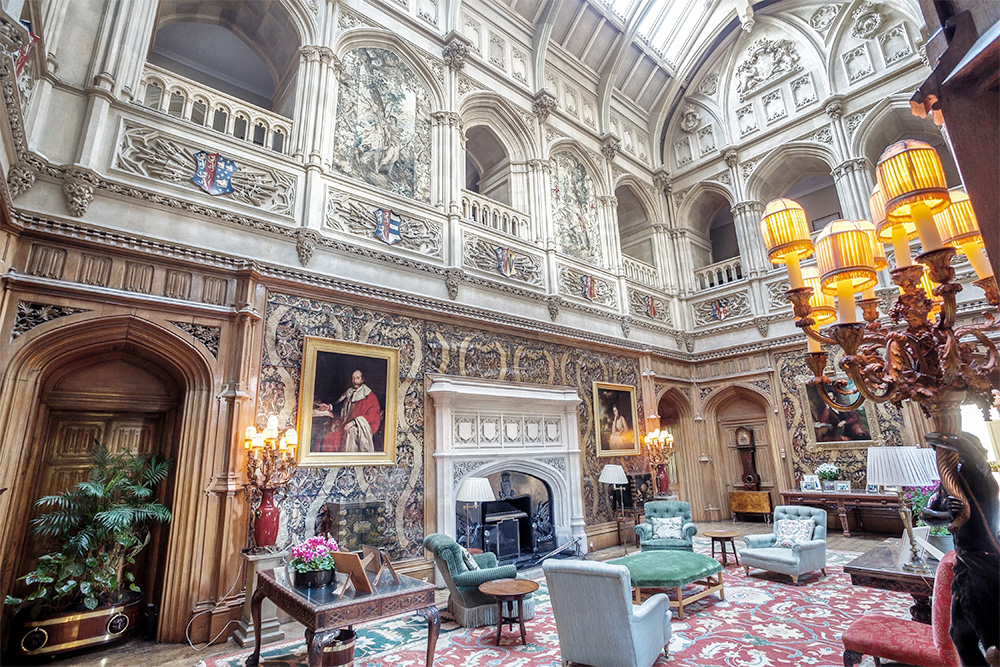 We shall have a private guided tour of this, one of the most impressive English country houses of the late-19th century on a day when there will be no other visitors there. The Castle has hosted many celebrated guests: Her Majesty The Queen was a regular when the 7th Earl, as Lord Porchester, was her racing manager. It is well known now as ‘Downton Abbey’. But the treasures now exhibited at Highclere allow a glimpse of an even more exceptional time: a golden world of history and archaeology, adventure and mystery, inspired by the 5th Earl, whose passion for Ancient Egypt was responsible for one of the world’s great archaeological finds.
At Highclere we shall see some of these finds close up: Tutankhamun’s middle coffin and his death mask in replica, beautifully laid out in the extensive Castle cellars. We shall see, too, many of the original artefacts discovered by Lord Carnarvon during his searches in the Valley of the Kings—some of which remained hidden for 70 years within the Castle walls. They came to light only in 1987, after the death of the 6th Earl, whose butler agreed that the succeeding Earl knew about all Highclere’s treasures, ‘Except for the Egyptian stuff, my lord’. The butler went on to reveal more than 300 ancient objects, secreted between the Castle walls. These now lie at the heart of this fascinating Exhibition—so surprising to find deep in the cellars of one of the great stately homes of England. 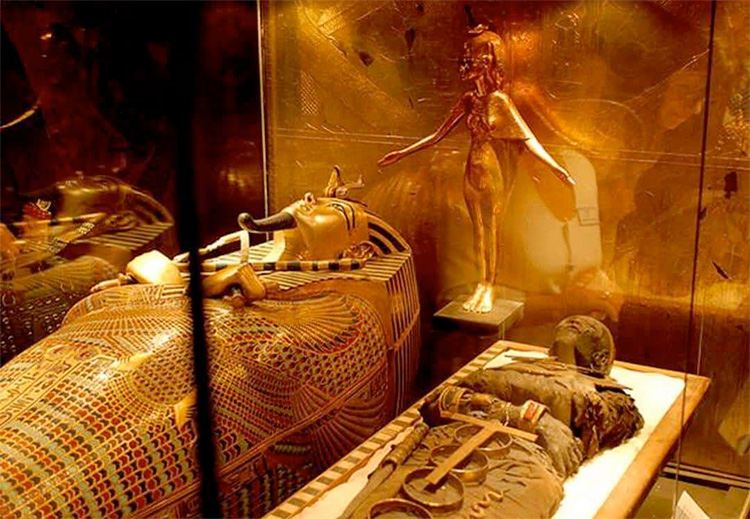 Why were these treasures hidden? Opinions vary. Certainly the 6th Earl forbade mention of his father’s Egyptian discoveries. Perhaps he believed that his father’s discovery of Tutankhamun’s tomb had cursed the family. The 5th Earl died only weeks after the discovery, having succumbed to sepsis caused by a mosquito bite, and he himself never saw much of the treasure, including the famous gold face mask which he had led the world to know, and which is now so emblematic.
The long lost collection is now presented in full glory within the cellars of the Castle, along with hundreds of unpublished photographs of the Valley of the Kings, taken by Lord Carnarvon between 1907 and 1914 and discovered in the family archives by Fiona, 8th Countess of Carnarvon. Said the Countess: ‘These pictures reveal the enormous scale of excavations that Lord Carnarvon and Carter carried out in the decade before their most sensational find. They tell the story of two amazing men, who have never been fully recognised in England for the discovery they made.’ At the exhibition launch, the Countess said, ‘This is the defining thing for Highclere. Downton will come and go. The discovery of Tutankhamun’s tomb is the greatest archaeological discovery ever. I want people to feel they’re inside the tomb, feel that sense of history.’
Visiting the exhibition, the Egyptian Ambassador described it as a beautiful piece of art and culture. ‘This exhibition is different to any other,’ he says. ‘It shows how people worked hard to discover something, a real feeling of history and the process of discovery.’

Highclere Castle is itself fascinating and historic. The 1,000-acre estate dates back to 749 when an Anglo-Saxon King granted it to the Bishops of Winchester. When Henry Herbert, created 1st Earl of Carnarvon in 1793, inherited the estate he brought in Lancelot ‘Capability’ Brown, whose landscaping is still so clear today. But the most conspicuous changes were made by the 3rd Earl, who in 1838 commissioned the architect Sir Charles Barry, best known for the Palace of Westminster, to remodel the house in Jacobean style. The work took decades, and Highclere became known for its opulence. There are between 250 and 300 rooms in the Castle Saloon alone, treasures including 17th-century Spanish leather wall coverings collected by the 3rd Earl, and 16th-century Italian embroideries on the Music Room walls.
After the private tour there will be time at leisure to wander through the gardens. Hundreds of cedar trees, planted over 200 years ago, are among the many trees in the Capability Brown landscape, some grown from seedlings given to the 1st Earl by his cousin, the Earl of Pembroke. The rhododendrons, azaleas and acers—imported from the Americas, India and the Far East—would have signified wealth and horticultural wherewithal. Abundant fruit trees, glasshouses and flowerbeds kept the Castle filled with fruits and fragrant roses—and these will be in bloom for our visit in June, a perfect time of year to see this great estate. 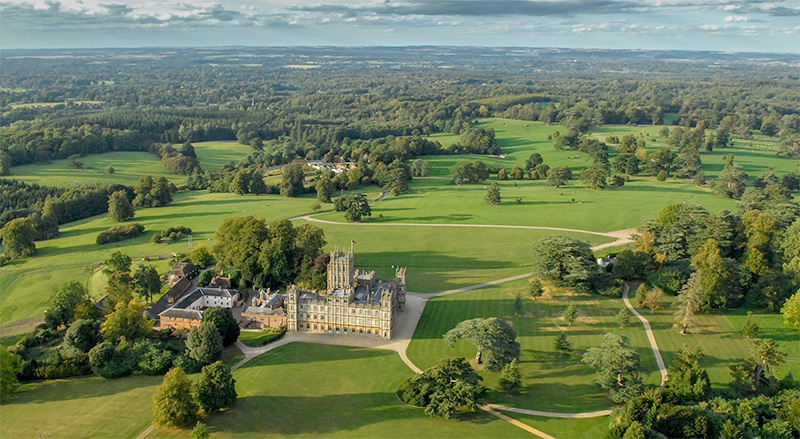 In mid-afternoon we shall take our leave of Highclere and its glories, returning to the British Pullman where its liveried staff will greet us with a Champagne reception as we set off on the return journey to Victoria.
Soon, a delicious three-course dinner will be served, complemented by the sommelier’s selection of wines. So now it’s time to relax, sip wine and Champagne, and enjoy each gastronomic course in the rich surroundings of this historic and authentic vintage train. Travel aboard Belmond British Pullman really does make the journey as magical as the destination. The memories will linger on.
BOOK NOW FOR THIS FABULOUS SUMMER 2023 EVENT

The date is Wednesday, June 7, 2023, and the usual cost is £630 per person, but CountryClubuk Members have the preferential rate of £479.
This superb event includes:
Round-trip travel aboard the British Pullman luxury train
Delicious three-course brunch on the outward journey
A private guided tour of Highclere Castle, open exclusively for British Pullman guests on this occasion
Time at leisure to explore the Egyptian Exhibition and enchanting gardens
A three-course dinner on your journey home, including the British Pullman’s sommelier’s choice of wine
The Belmond British Pullman departs at 09:45 on Wednesday, June 7, 2023, from London Victoria and returns to Victoria at 17:20 on the same day. To extend the pleasure with a luxurious stay in London before or after the trip—the Goring for example is in walking distance of Victoria and other hotels are an easy taxi ride away—please call 020 7399 2960.
Places are strictly limited and we believe that this will be a popular event.
Please click here now to book your places instantly, or call Member Services to make your reservations on 020 7399 2960.
PLEASE READ: CountryClubuk Club Rules and Terms and Conditions