In celebration of Leonardo 500—the 500th anniversary of Leonardo da Vinci’s birth—Fox & Chave have created a new series of silk designs: and here is the celebrated Da Vinci Horse in a new pure silk chiffon stole, sketches by the great master beautifully portrayed. This is a delightful way to honour the great man in this, his 500th year.

Leonardo was the first artist to study the anatomy of the horse, which he did with equal skill and fervour to his studies of the human form, and all else. In 1482, he wrote an ambitious proposal to Lodovico Sforza, the powerful Duke of Milan. In addition to offering his skills as civil engineer, architect, bridge-builder and designer of futuristic military weaponry to empower and protect Milan’s soldiers against the threat of French conquest, da Vinci proposed the casting of an enormous bronze statue of a horse—Il Cavallo—to stand guard over the Duke’s castle and honour his father, Francesco Sforza. Lodovico, one of the most powerful leaders of Renaissance Italy, who spent astonishing amounts of money to advance the arts and sciences, employed da Vinci and became his most influential patron.

While da Vinci maintained his studio, oversaw the work of his apprentices, and worked on painting The Last Supper, the 24ft tall clay version of the great horse took shape in a vineyard near the Duke’s castle. Seventy tons of bronze were set aside for the casting, but when war with Charles VIII of France appeared imminent, this resource was diverted for weapons, and The Horse maintained his vigil in clay. In 1499 Milan fell without a fight, and victorious French archers used the clay horse for target practice, reducing it to a pile of rubble. Da Vinci was heartbroken.

But at least some of his drawings survived—and here is a celebration of them, printed on silk chiffon, creating a long and elegant stole light enough for spring and summer, the perfect finishing touch to an outfit for a night at the opera or ballet, the theatre, a party—and of course a gallery private view. Hand-rolled hems. Dimension 180cm x 55cm. 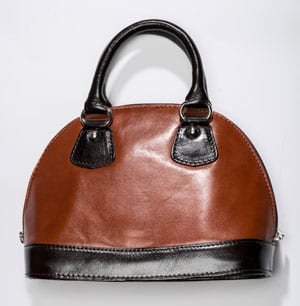 Chic duo-tone leather Taranto handbag from Italy: a snip at £49